What I am Loving – Meet the Sloths!

December 11, 2013 By Sarah in General, What I am Loving! No Comments Tags: Animal Planet, Meet The Sloths, Sloths, Slothville

I have discovered that there is a new reality show in town…and the participants are seriously cute!!

Forget Meerkat Manor…If you have Foxtel (Australia), tune into Animal Planet tonight (Weds) at 7.30pm … I caught the first episode last week and was totally hooked!

I mean…how cute is this… 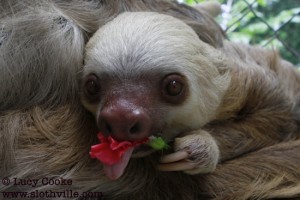 Meet The Sloths follows a year in the life of five slow-moving residents of the Aviarios Sloth Sanctuary in Costa Rica, a sanctuary dedicated to saving orphaned or injured sloths. It is humorous and heart warming…its been described appropriately as a “docu-soap” that reveals a surprising soap opera of dramatic rescues, clandestine romance and deadly rivals! 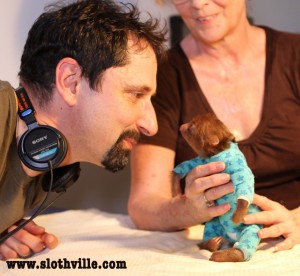 To view the trailer of the series, click here!

I have always been fascinated by sloths…even the name “sloth” is so unusual…in a world where everything seems to go faster and faster, here are animals that take life at a very relaxed pace!

Us humans could probably learn some lessons from them!

Despite the very high cuteness factor, orphan baby sloths are very hard to keep in captivity and would make terrible pets. For example, they cannot digest cows milk, only goats milk.

Here are some facts about sloths….

Fact 2: Even when awake they often remain motionless, so much so that algae grows in their fur.

Fact 3: There are two main species of sloth identified as two-toed and three-toed sloths. Two-toed sloths are the bigger and hang upside in the trees more than their three-toed cousins who are known to sit upright on branches more often.

Fact 4: The main reason for sloths staying so still in the trees is so they aren’t as visible to predators such as eagles who look out for movement, also the green algae that grows in their fur helps camouflage the sloths in trees.

Fact 5: Though sloths look like primates they are actually distant relatives of anteaters and armadillos. 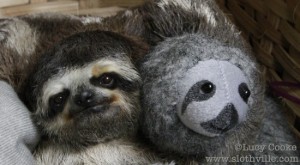 Fact 6: Sloths have extra vertebrae in their necks meaning they can turn their heads around to close to 270 degrees.

Fact 7: Sloths are most vulnerable to predators on the ground so rarely descend from the safety of the trees. They only descend every week or so and that’s just so they can ‘go to the bathroom’ they dig a hole and then cover it up when finished.

Fact 8: Sloths hang upside down aided by the powerful grip of their long claws. Their grip is so strong that dead sloths have even been found still hanging upside down.

Fact 9: Sloths have been known to mate and also give birth whilst hanging in the trees.

Fact 10: Though sloths are unable stand up straight on land and have to drag themselves along with their claws they are surprisingly good swimmers and use their large arms to swim with a breast stroke type movement.

If you want to see more sloth cuteness, check out these YouTube clips!