And yes, you read the title correctly and I bet you are wondering what sort of concert this was!

It was an event that featured not one, but two world class organs…a classical pipe organ and a Wurlitzer theatre organ.

And it was a fundraiser too…proceeds are to be directed to the Royal Children’s Hospital Foundation for the Children’s Bioethics Centre. 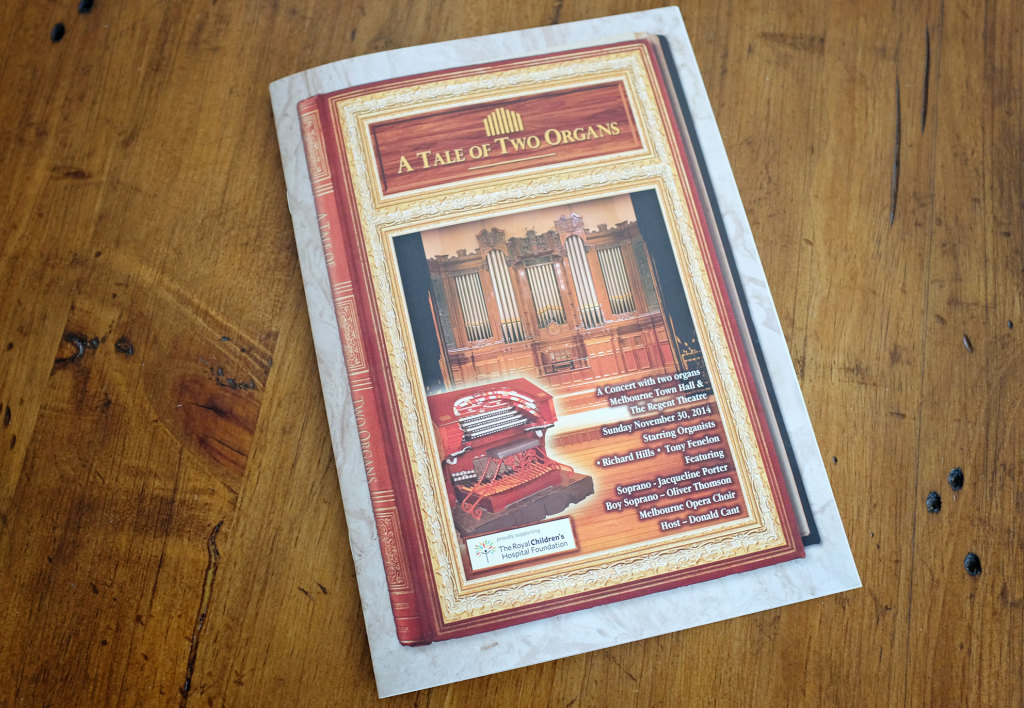 The first half of the program featured the Melbourne Town Hall Grand Organ and the second half featured the amazing Wurlitzer organ in the Regent Theatre…just over the road!

This is the first time anything like this has been done…in fact, the compare said that there is nowhere else in the world where two organs such as this are located so close to each other.

And in a weird twist, both are not the original ones, as the Regent and the Town Hall suffered extensive fire damage during their histories.

And to play the organs were two outstanding musicians….Richard Hills from the UK, and our very own Tony Fenelon….both these men have been able to master both classical organ and theatre organ…two very different styles that are worlds apart.

The afternoon started at the Melbourne Town Hall…this organ was installed in 1929, once the rebuilding of the Town Hall was completed after a devastating fire in 1925.

In the late 1990’s, major work was done on the organ to ensure it’s ongoing survival, and this refurbishment still remains the largest financial project on a musical instrument in the southern hemisphere!

For this concert, the four manual mobile console was used and there were two large screens on the stage, so we were able to watch these masters as work…fingers flying over the consoles, and feet dancing on the pedals…it was fascinating!

You can see the console on the floor in front of the stage…. 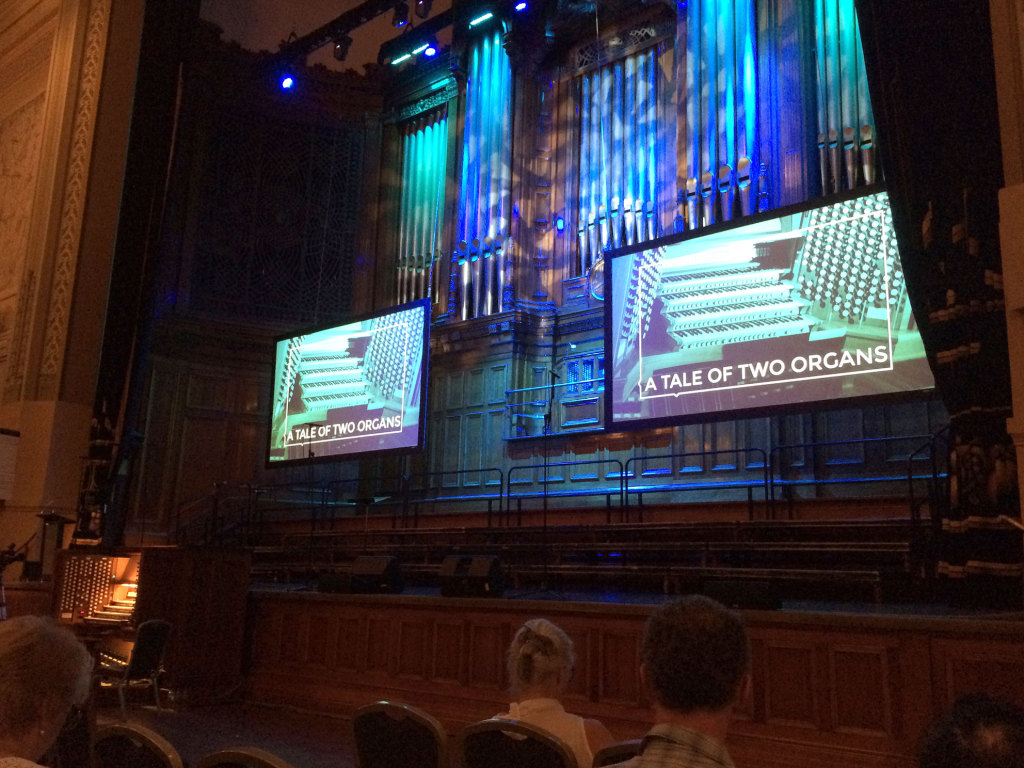 Hills played first, including a Prelude and Fugue by Bach….he then accompanied the beautiful Soprano singer, Jacqueline Porter for two well known pieces, Laudate Dominum by Mozart and Let the Bright Seraphim by Handel.

He then finished off with Carillon de Longpont by Louis Verne.

Fenelon then took over the console…his set included some solo pieces, aswell as accompaying the Melbourne Opera Chorus for Carl Orff’s O Fortuna!

He also accompanied Porter and a boy soprano, Oliver Thomson, in a wonderful rendition of Pie Jesu.

The first half was finished with Hills and Fenelon playing a duet together…and it was a masterpiece of dexterity!

Then it was time to head over the road to the sumptuous Regent Theatre…however, this turned out to be not as easy as the organisers thought.

Imagine a very large crowd, many of them quite elderly,  trying to cross a busy city street, and then trying to get into the theatre….it was chaos….with some very stressed Regent staff! 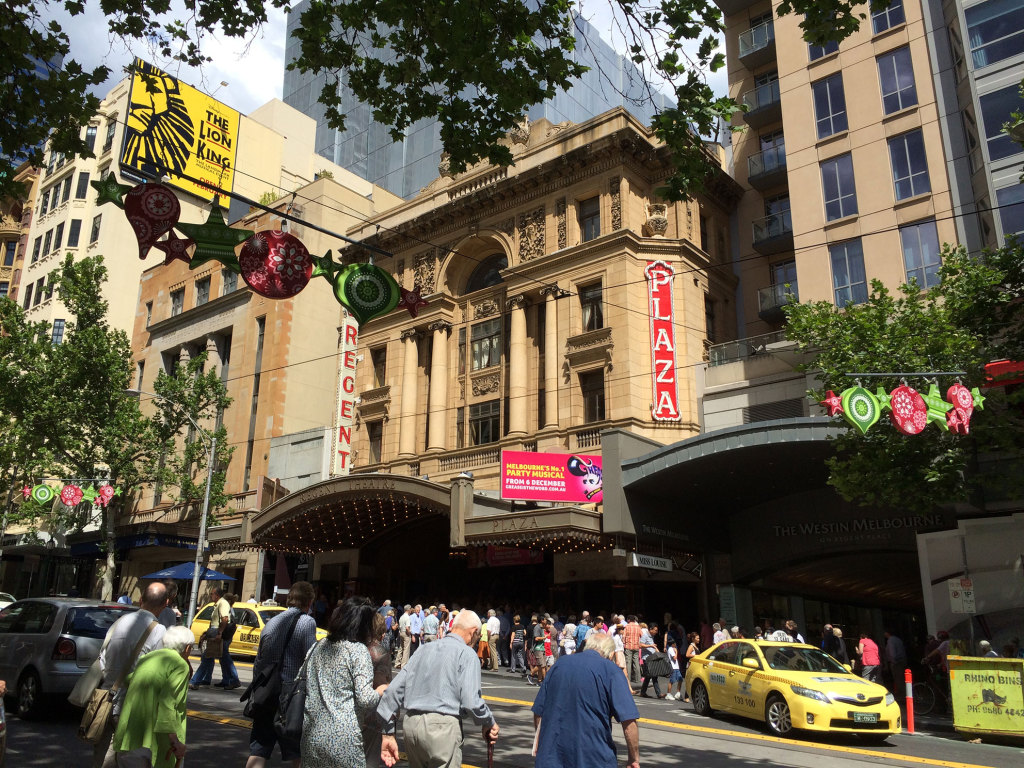 We took our time, crossed safely at the lights, but still weren’t able to get even into the foyer for about 20 mins! 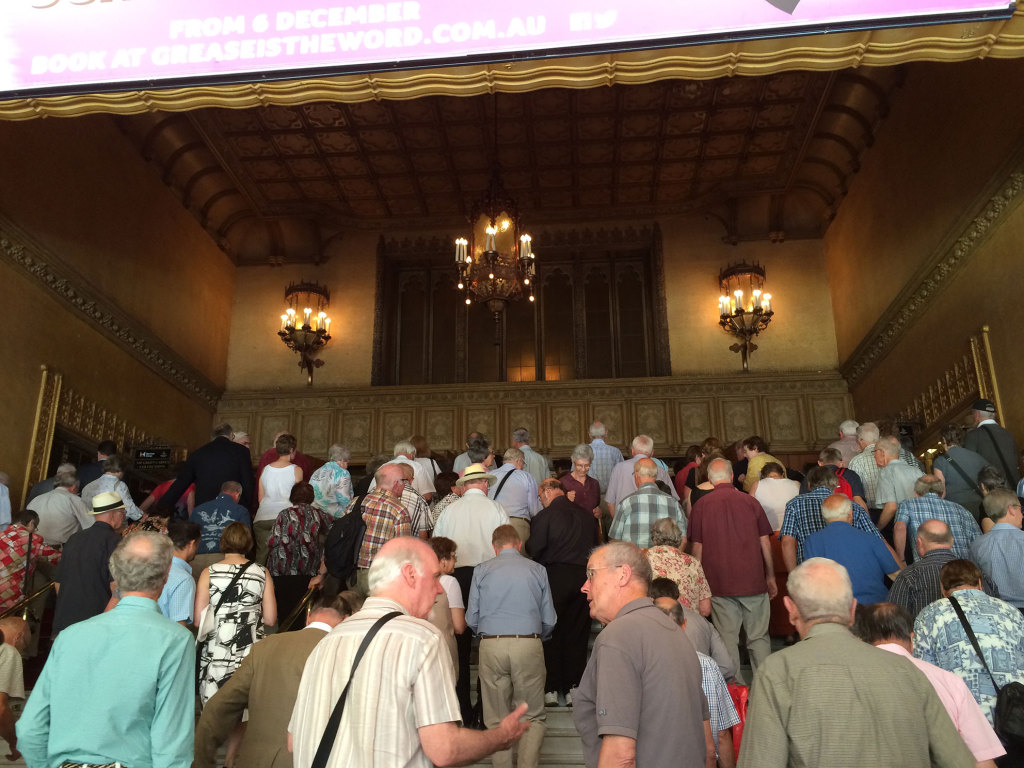 Once we did, the fact we were stuck in a major bottleneck allowed us time to admire the beautiful roof of the foyer…hard to believe that this theatre sat empty and derelict for 26 years…. 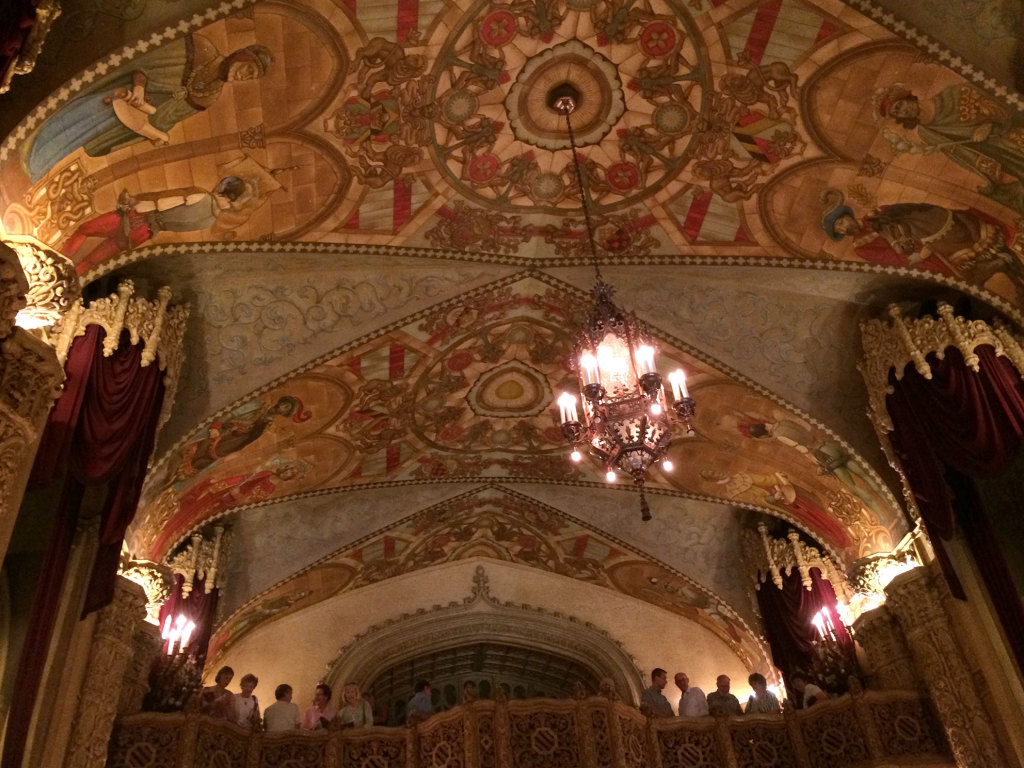 Finally, everyone made it safely to their allocated seats and we settled in for the second half….and what a ride it was! 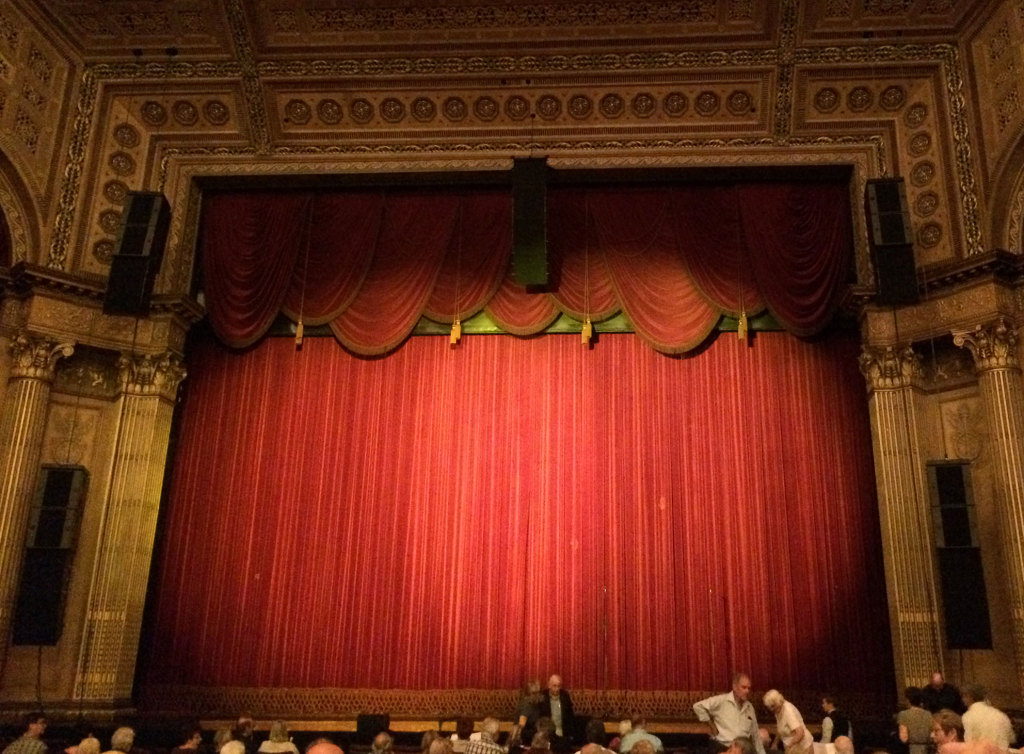 It started with the huge Wurlizer organ rising out of the depths of the theatre, while Fenelon played.

Highlights included seeing a short movie from 1921, showing this very organ being built, and then transported to its first home in San Francisco’s Granada Theatre…it was described as the biggest organ in the world, and included every musical instrument known to man!

This is actually the third organ to be installed into the Regent…it arrived in Australia in 1994, during the major refurbishment that brought the theatre back to life.

Hills playing selections from my favourite all time movie, High Society….they also showed highlights from the movie on a screen

Then there was some magic….Fenelon accompanied Donald Cant in two pieces…..Music of the Night by Andrew Lloyd Webber and Hallelujah by Leonard Cohen.

It was totally electrifying…Cant’s voice supported by the organ, in gorgeous surroundings….I don’t think anyone wanted it to end!

The event finished with a spectacular performance by all the cast, singing a medley with highlights from the stage musicals such as Singin in the Rain and Les Miserables!

The concert finished as 6pm…even with the longer then planned interval, I think no one could complain that they didn’t get their money’s worth!

We started with the classics, in the largest town hall in Australia…and finished with the rousing song Do You Hear the People Sing in the opulent surroundings of the “Palace of Dreams”.

The Tale of Two Organs….a once in a lifetime experience!