So I have Thyroid Cancer…or at least I did…just over six weeks ago, I underwent surgery to complete remove my thyroid due to a biopsy showing a cancerous nodule. You would think that the fact that last year my husband faced and survived a liver transplant, that the powers that be would let us enjoy good health from now on. But no…

The day we moved into our new home, the day we were meant to be starting a new chapter after going through hell and high water, was the day I found out I now had Thyroid Cancer. I knew something was up as I had received a call from my doctor’s room on Friday, saying that I needed to see her urgently on the Monday…that is never a good sign. And I was right. My husband couldn’t even be with me when I found out as he was busy dealing with the removalists and painters…a totally chaotic day.

So how did I feel…more annoyed then anything…this was so NOT fair! There was tears later on as the word “cancer” reverberated round my brain. But quick research on “Dr Google “revealed that what my doctor said was right…if you are going to get cancer, this is the best one to get. But there is still the word…Cancer…that scares the hell out of me and always has. So many people we know have had various forms of cancer….it doesn’t discriminate, it strikes without reason…

To back track a bit, my cancer was only found because I had a diligent doctor. I had been feeling very run down, tired, foggy brain, weight gain, hair falling out…just feeling horrible..and it was getting worse. It was all originally put down to stress, and the adjustment of having gone through what was a pretty tough time. But after a while, it didn’t make sense to me…my husband was now back on his feet, and loving life, whereas I was going slower and slower. It isn’t in my nature to get bogged down with things, I tend to just get on with it..and the future looked bright for us. But my doctor in her wisdom ran a full health check, including thyroid, and discovered that my thyroid was not working well at all.

So waited four weeks for another blood test, and still the levels were not good. Diagnosis was Hashimoto’s Thyroiditis. She then decided it would be worth having an ultrasound just to check everything thoroughly…and that found a nodule that looked suspicious. Next stop was a biopsy.

If you need to have a biopsy, its not too bad. I found the local anesthetic hurt the most, the actual biopsy was more uncomfortable then painful, and it was over in minutes.

And thats when the wheels came off further with the news that the nodule was indeed cancerous..

So I was sent off to see a surgeon and a few weeks later, I was thyroid, and hopefully cancer free.The surgery was about 2 hours, and apparently my thyroid was hard to get out because of the Hashimoto’s. And there ended up being two cancerous nodules in there, one either side. Luckily (if thats appropriate word for this) it was papillary cancer which has a very good prognosis. And my lymph glands were clear.

One hint when having thyroid surgery…get onto crushed ice cubes when you can after surgery is finished..soothes the throat which can be really sore due to the breathing tube. I had a great nurse who offered crushed ice as soon as I was in the ward, and it was the best thing to relive the pain of swallowing. I went through cupfuls!  And to soothe the outside of your throat, ie where the wound is, an ice pack. And don’t expect to eat solids for a few days…my throat was so sore, and swallowing was such an effort, that I lived on jelly, mashed potato, soup and ice cream!

I am now in limbo while I wait to see a thyroid cancer specialist at yet another hospital. The decision will then be made whether I need to have the radioactive iodine treatment or not.

So the moral to my story, is if you are not feeling quite right, and your symptoms include feeling very tired, weight gain, aching joints etc, get your thyroid checked…especially if other members in your family have thyroid issues! Even through I had cancer, it wasn’t the cause of my symptoms…if I hadn’t had a doctor who was very thorough, it may never have been found until things got nasty. 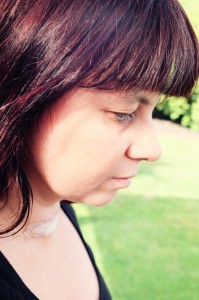