My Friday Five – What Scares Me!

June 19, 2015 By Sarah in General No Comments Tags: fear, My Friday Five, things that scare me

This week’s My Friday Five is all about what scares me…there aren’t many things I am afraid of, but these all do even though some aren’t exactly rational… 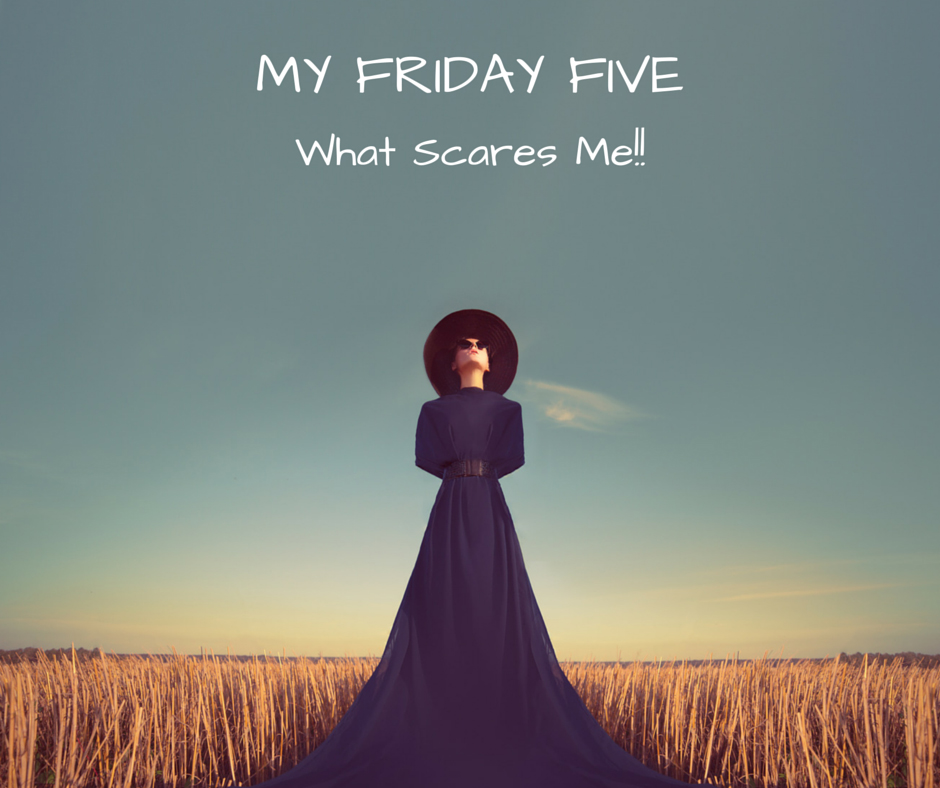 This is a bit of a contradiction as I love wild weather….but I am terrified of strong winds if I am anywhere near big trees….because I am worried one might fall onto where I am!

We have some very large trees at home, and I have to check my weather station to see which way the wind is coming from…if it is coming from a direction that means that if a tree falls, it will fall away from the house, then no problems.

If I am somewhere where there are no large trees, then no problem.

Otherwise, I worry, and get more and more nervous which each strong gust…though it has never actually happened…yet…

I am not afraid of your average spiders…even those which are highly poisonous.

It’s the usually harmless, big as your hand spiders that scare the bejeezes out of me…particularly as you don’t tend to notice them till they just about fall on your head…or you put your hand near one…gives me the shivers just thinking about it!

I am particularly terrified of having a spider appear in my car…I would sell my beloved car if I couldn’t get it removed, that’s how much I am scared of them!

Funny story about one altercation with a spider and a car….I had one that terrorized me for a week or so few years back.

As soon as I started driving, it would appear on the back window, thankfully on the outside.

I even got someone to drive behind me to see if they could spot where it was coming from.

Finally, I declared war as my nerves couldn’t stand it anymore…stood at the back of the car one evening until I saw it appear…it had been hiding out in the crack of the back tailgate.

I have a great fear of being behind a large truck on a steep hill …and it rolls back over the top of my car.

Therefore, I always keep a healthy distance from trucks when heading up a hill…I will also quickly work out the best escape route if the truck suddenly  comes towards me…

I don’t mind admitting, and I have talked about this before on the blog…I am terrified of cancer.

It is not fussy…young, old, ill, healthy…it seems to hit with gay abandon…often with no rhyme or reason.

And this is one fear I have had to face…but thankfully, it has been a brief acquaintance, and fingers crossed, our paths won’t cross again.

This is a slightly weird one…I have a fear of being forgotten…of never achieving anything that will remain long after I have gone.

It is a fear of leaving nothing to show I ever existed…which is one reason why I had to get over my hate of being in front of the camera, as I never appeared in any photos….I was always taking the photos.

I don’t ave any idea what legacy I want to leave behind…maybe this blog will be it!

What are you afraid of…what are your fears? Share in the comments below…