Technology fascinates me…and I love gadgets that come along with it!

Ipads, iphones, tablets, phablets and so on have become such a part of life, which means we can now have instant access to the web.

I am a child of the 70s so was just finishing school as computers became more available….I remember our first “laptop”…it was like a large box and was quite heavy!

I also remember when we first got internet at work….it was like having a special privileges if you were allowed to link into the phone line and dial up!

How quickly we forget…I can’t even remember what I first used the World Wide Web for….

So I really enjoyed reading this book…100 Ideas that Changed the Web by Jim Boulton is not only about ideas that changed the web, but also those that led to its very creation!

It also demonstrates just how far technology has come in such a relatively short period of time! 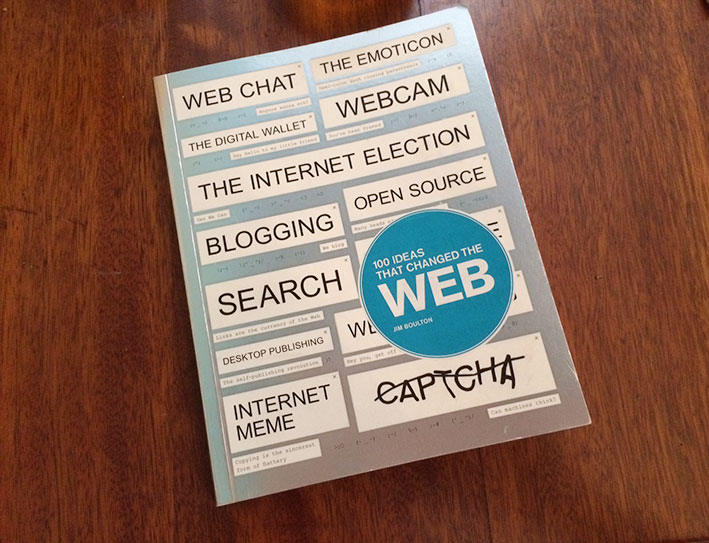 The first 20 ideas on the list examine “the precursors, those ideas that led to the creation of the web”.

This includes the PC, the modem and of course, the internet!

One thing I will never forget is the sound of a modem connecting…and the fact that it seemed to take forever!

Ideas 54 – 73 address “the birth of ecommerce”….when brands started to use the web and the first peer to peer network was developed!

With ideas 74-98, the web came of age….it became “dynamic, social and crucially, mobile”!

And the invention of the iPhone in 2007 was when the web finally arrived on our mobiles!

Here are some interesting facts that I bet you didn’t know….

I was curious about where and how blogging happened…and I found it at idea number 49!

The first beginnings of the “blog” started in 1997 by Jorn Barger…he began to publish daily entries on his website, and started to call it a web log.

In 1999, Peter Merholz wrote “we blog” as a joke on his website….and the term stuck!

This book makes me realise that everything on the list has come from an idea….without these ideas, and the people who made them real, things would have been very different!

And it makes you wonder what will be developed in the next twenty years!

So iyou love technology, or are curious as to how commonplace things such as emoticons and web chat came into life, get your hands on this book!

100 Ideas that Changed the Web is available at all good bookstores and online…I bought my copy from Readings!

« My Friday Five – Things that wind me up! » When Music Brings People Together