Before Technology Took Over!

September 8, 2014 By Sarah in Gadgets, General 1 Comment Tags: childhood, glad I had a childhood before technology took over, technology 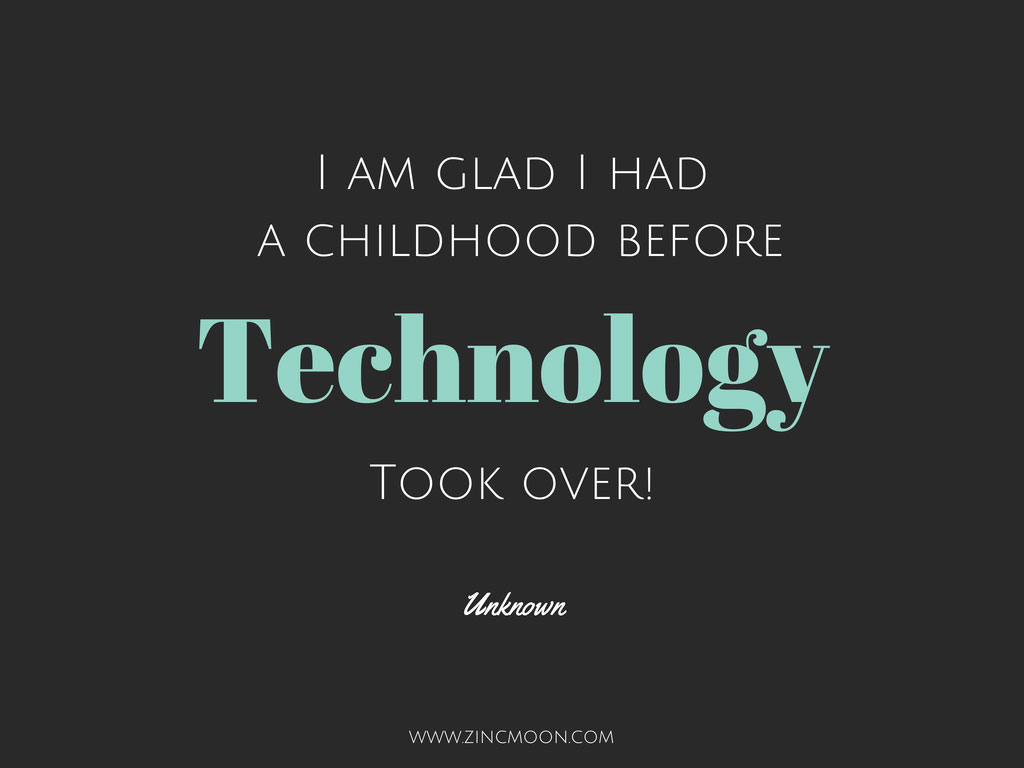 I saw the above quote the other day, and I am in total 100% agreement with it!

I love technology…in fact, I am rather addicted to having the latest and greatest…..but I believe that the reason why I appreciate the technological advances, is because I grew up in a time before computers, the internet, the world wide web and so on!

I remember our first home computer, and I remember getting my first Apple laptop!

I remember being given one of the first mobile phones…it was so big I had to leave it in the car as it wouldn’t fit in my bag!

I still remember when I opened the box and turned on my first ipad, the day after it was released!

Now I can’t imagine not having a touch screen!

I love the fact that I can now work from home when I choose, and I have everything that I need to continue with my tasks…I couldn’t have done that less then 5 years ago!

In fact, I can be anywhere in the world and still be connected…as long as there is a internet connection of course!

I am currently sitting at at my desk at home, typing this post on my Surface Pro while listening to music being streamed from my iPad Air via the Pandora app, while being kept up to date with events via social media on my iphone!

Blogging itself wouldn’t exist if it weren’t for technology!

And technology is part of the reason my husband is alive today….the machines that kept him alive during his liver transplant and the monitoring equipment in ICU that alerted to any issue.

Not having grown up with this sort of technology means I still have the feeling that this is all a bit of a dream from the future!

Every now and then, I sit back and think about just how far we have come in a relatively short time!

I admit I would have been just a little excited if someone had shown the childhood me a glimpse into what we have now!

Actually, I probably would never have believed it!

For example, I miss getting a good, old fashioned letter in the mail…its all just bills and junk mail now…boring…

I used have quite a few pen pals while I was at school, and I used to love the anticipation of heading home after school to see if a letter had arrived for me!

Letter writing has been replaced by emails, texts and messages through social media….which all have a place…I am not saying that I don’t love being immediately in contact…it is just I miss opening my real mail box to find a hand written letter once in a while!

I have loved taking photos from an early age, and I miss the excitement of getting a film printed, the days of waiting to pick it up, and the relief when there were actually a few good shots!

However, there is one thing that I don’t use technology for…I still prefer the good old fashioned way when it comes to keeping a diary and making lists!

I have my ipad, iphone and tablet, all of which provide apps or software for me to use electronically, but I stick to using paper and a pen….writing things down helps me to remember as I have a mind like a sieve!

I love notebooks, pens and pencils….and I love a list that I can tick off as I go through!

No technology is going to replace that for me!

And sometimes, I get a hankering for an old style phone with a rotary dial…I have no explanation for that!

What do you miss from the old days….or are you very happy to be living in this era?