Over the last few months, I have fallen back in love with film photography.

I used to shoot film when I was younger, but like many others, quickly switched to digital as soon as I could.

But the call of the past has got me, and I now use film cameras alongside my digital of choice, the retro looking Fuji X100s.

And I am now moving onto the next step of building my own collection…albeit a small one…of vintage cameras that interest me.

Which got me thinking…how many previously loved and used cameras are now languishing at the back of cupboards, up in attics, in garages…in sheds out the back?

Once they were a prized object…often costing way more then the weekly wage of the time.

They captured a world very different to the one we are in now…it was a more manual world where it took more then pushing a button to take a photo.

Improvements in technology has meant that one by one, the film cameras lost favour with their owners as they moved onto the next bright, shiny new thing. 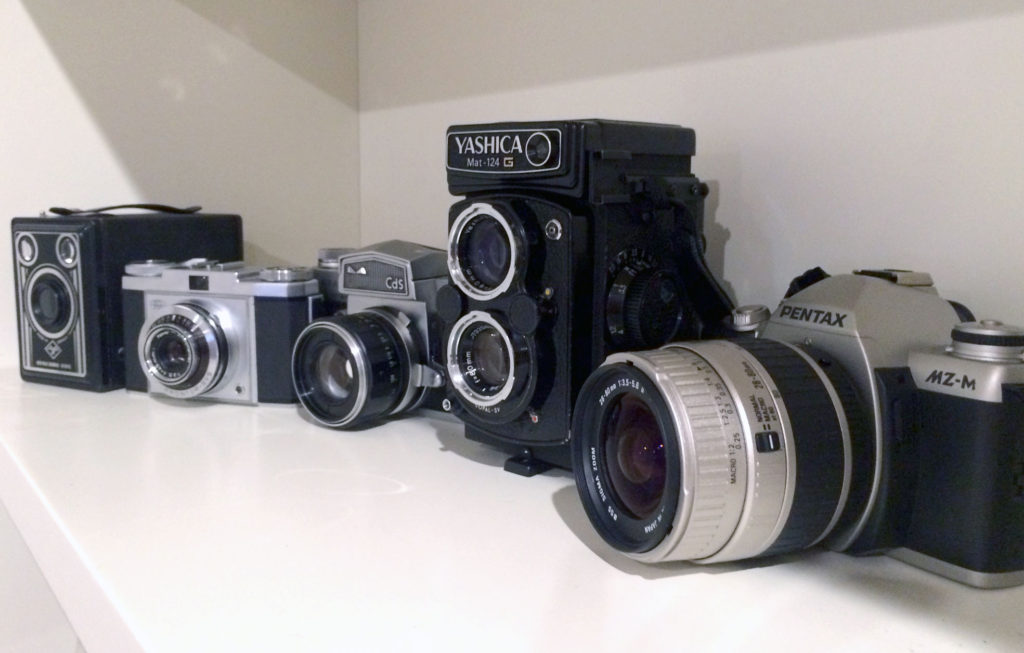 None of these are particularly rare or valuable, but I am enjoying learning how to get the best out of them.

And I have to say knowing the history of a vintage camera just adds to the whole film experience.

I know the history of the majority of them as I was gifted them by their owners…but have no idea how the Yashica ended up in a local camera store, or how the Miranda came to be sold via eBay and journeyed from the US to my post box.

So do you have a vintage camera somewhere…maybe you used it when you were young, or perhaps it was passed down to you from older relatives?

If so, go rescue it…bring it out into the light again!

Perhaps see if it still works…get it serviced…slip some film in and bring it to life again.

Yes, you can still buy many formats of film!

If you are not photographically inclined..at least not with film cameras…consider selling it…even if it doesn’t work.

Some rarer cameras are worth quite a bit… more so if they are in good condition.

Or if that is too much work, perhaps pass it on to someone who will enjoy using it.

Because cameras aren’t made to sit languishing in boxes gathering dust…they deserve better than that!

Do you have a vintage camera? Do you know it’s history? Share in the comments below as I would love to know!

« What I Wore Roundup – Edition 48 » I have hit a wall…running out of things to blog about!

I have recently read of the death of Wellness Leader, Jess Ainscough, through my social media feeds. Diagnosed with a rare and aggressive cancer in 2008, she received chemotherapy, but when the only choice left was to amputate her arm and shoulder, she decided to turn to Gerson Therapy...a therapy that claims to boost the body's own immune system. I Continue Reading →