Waiting for a transplant can be the most worrying, scary, nervous, horrible time….even just getting on the list is not easy…you need to be sick enough to need a transplant, but well enough to survive the actual operation!

So when the call finally comes through, its hard not to be more than a little excited…and a little relieved…and sad because it means a family has lost a loved one.

My husband waited 14 months on the list….14 long months of watching him get sicker….and sicker.

Being on the waiting list means you have to have your mobile with you at all times…you need to let the Liver Transplant Unit know if you aren’t at home…and you can’t go further then two hours from the hospital.

We don’t think the co-coordinator has ever found a potential liver transplant patient at the gym when receiving the call!

And then he rang me…and I didn’t answer my phone! I was in the kitchen and my phone in the bedroom…when I finally went to check my phone, there was quite a few missed calls!

Jas in the meantime had rung family to let them know…so basically I was the last to hear!

As we had already experienced a dummy run…where you get called in and you wait, only to be told there was something wrong with the donor liver and the transplant was called off…we were cautiously optimistic that this time, it would go ahead.

We got ready and drove into the hospital, arriving about 8am. It was a very surreal drive…

When you arrive for a transplant..and if you aren’t already in hospital…. you first have to go through emergency, where hopefully they are expecting you.

Kind of a weird experience having to walk through all the people waiting in Emergency and say that we were here for a transplant!

But we were greeted with great enthusiasm by the nurses, and escorted through to the xray department, where Jas had to have a chest x-ray.

And with lots of “good luck” wishes from the staff,  we were taken up to the liver ward…a familiar place…and all the paper work was done to get him admitted.

The blood nurse came and took blood for further matching and testing…couldn’t believe how many vials of blood they had to take. 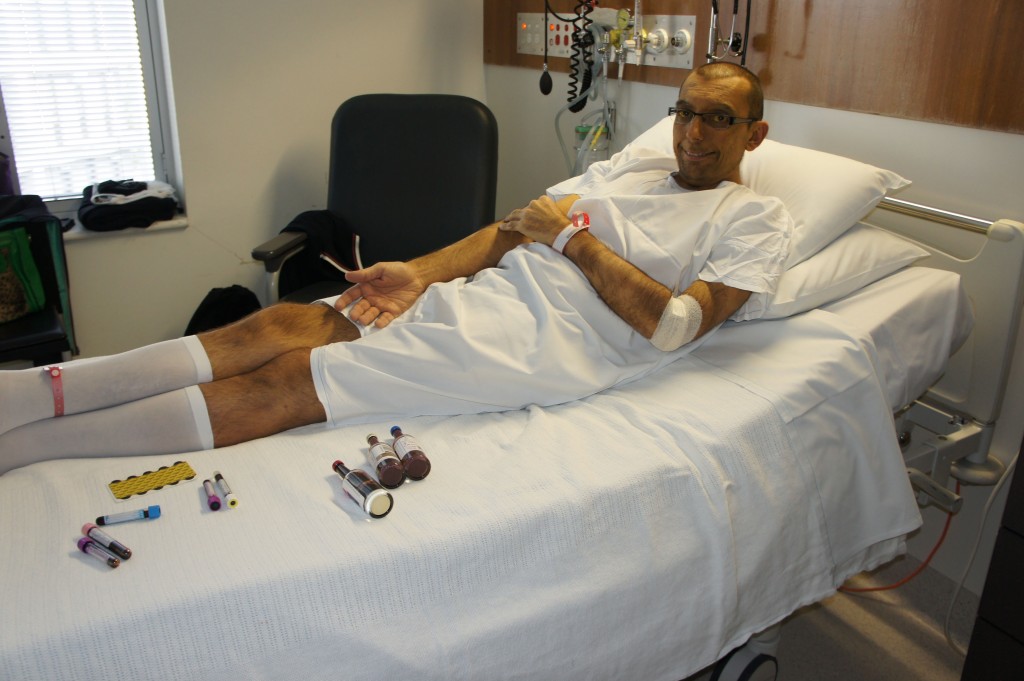 Lunchtime came and went…Jas wasn’t able to eat so I snuck off to grab quickly grab something, hoping he wouldn’t be whisked away while I wasn’t there.

We got nervous every time footsteps came down the corridor… were they coming coming towards us or another room….

One of the co-ordinators came in and said it wasn’t looking good….our hopes dropped…

Another liver unit doctor came in and said the opposite…things were looking like it was happening…our hopes raised again.

It was a total emotional roller coaster!

Suddenly time sped up…within minutes, Jas was whisked off to be taken down to theatre…

I was asked later how I felt seeing Jas being wheeled down the corridor to theatre, and all I could say is it was utter relief. Whatever happened from then on, it was a new journey with different challenges.

Without it, he would die…this was his second chance and we had absolute faith in the surgeons and the rest of the transplant team. 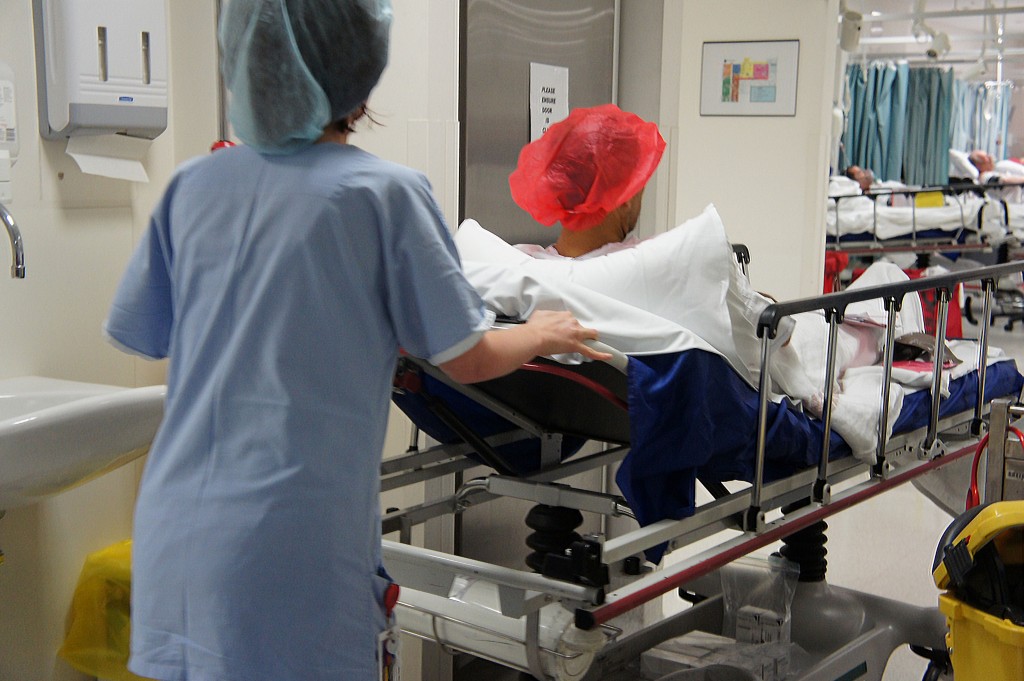 I had a pastoral care staff member with me who was new and didn’t know the layout of the hospital…so I took her on the shortcuts to get out of the theatre area, and headed to the cafe…once again to wait…

Because even though Jas had been taken into theatre, that still wasn’t a confirmation that the transplant would still go ahead. There was about an hour of putting lines in etc and the whole thing could still be called off.

The words I wanted to hear were “knife to skin”…a rather graphic statement that means that the transplant was happening…and about 4.30pm, it was confirmed…Jas was going to get a new liver.

I headed home as transplants can often take hours and hours and we don’t live too far from the hospital. My parents came and stayed to keep me company.

The Liver Transplant staff are fantastic at keeping family updated with the progress of the operation, and I got hourly phone calls.

One call was to say that Jas had given the surgeons a scare with his blood pressure dropping suddenly, but they had got everything back on track again.

It was a very long evening…

Then at about 11.30pm, I got a call saying he was just about out of theatre and into recovery, and would I like to come in and see him? I wasn’t planning too but as it wasn’t too late, I headed back into the hospital with my parents.

After a wait outside ICU…which was scary as there aren’t many lights and the corridors are deserted…very glad I wasn’t by myself…one of the liver surgeons came and took us into a small room, in the ICU ward.

He gave us the update of how Jas was going, and how well the surgery went. He answered all our questions and it was really good to be able to take a little time to speak with him.

I then was able to go and see Jas…I knew he would have heaps of lines, tubes and machines and boy, did he just! 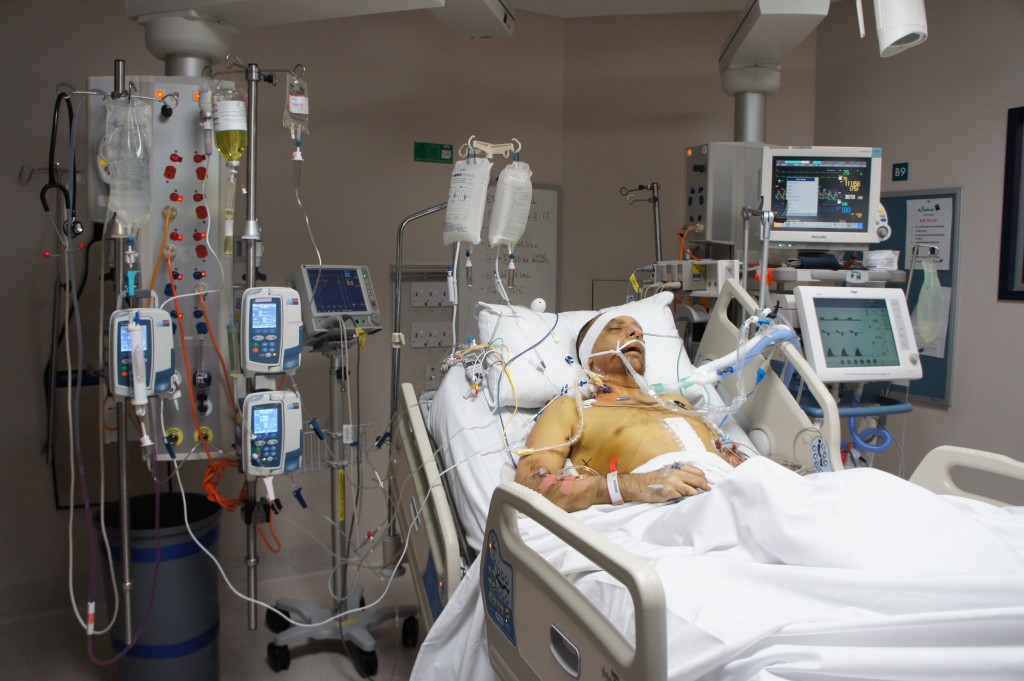 We had joked that when he had the transplant..to give me the “thumbs up” sign that he was ok… he was not really conscious yet he must have heard me, because as I came around the corner, he put his thumbs up…something I will never forget…

He was then put back into an induced coma.

The ICU nurses were brilliant, and answered my questions and explained what was happening.

I left the hospital totally exhausted, relived and comforted that everything had gone as well as it could and he was in good hands.

And he had given me the “thumbs up” so I knew he was ok.

I was also sad, thinking of the donor family….

I got a call first thing in the morning to let me know he had a good night and everything was fine.

My mum and I went in again later in that morning, to find him awake and coherent…no hallucinations etc. 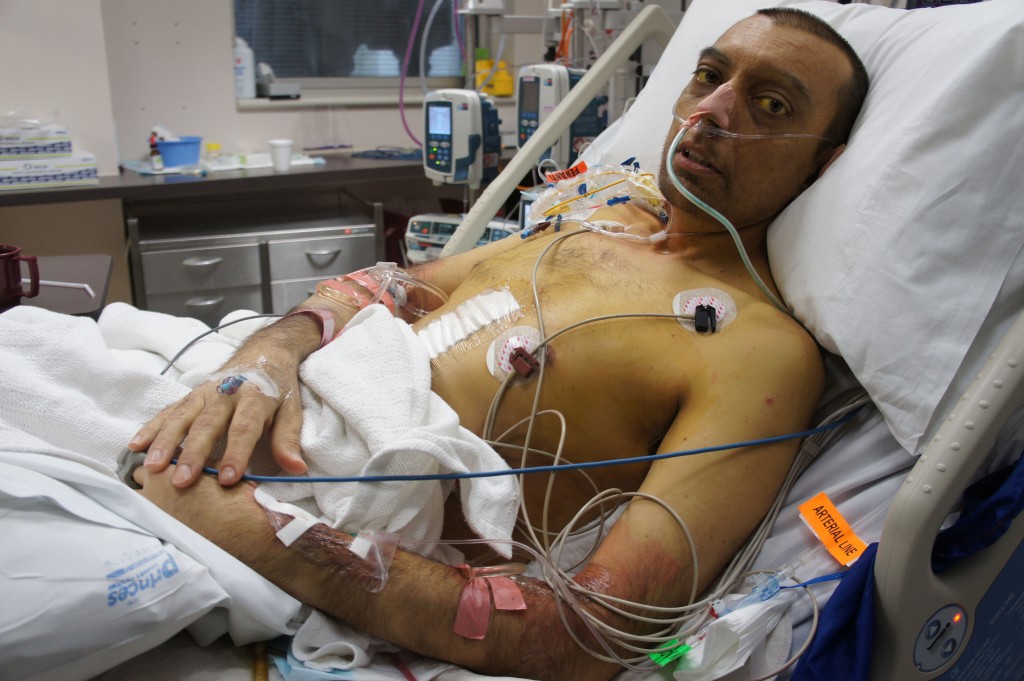 His best comment was telling me about how the guy in the cubicle opposite had so many tubes and machines…I had to take a photo and show him just how many he had!

Less then 48 hours, he was out of ICU and back up in the ward.

Nine days later he was home….still can’t believe it how quickly his body adjusted!

Its now been approximately 18 months since that day, yet it will remain in our memories as the day Jas got a second chance at life.

And without the generous decision of the donor family to allow organ donation, it would never have happened.

To find out more about DonateLife Week 2014 and organ donation, please visit the Donatelife website. 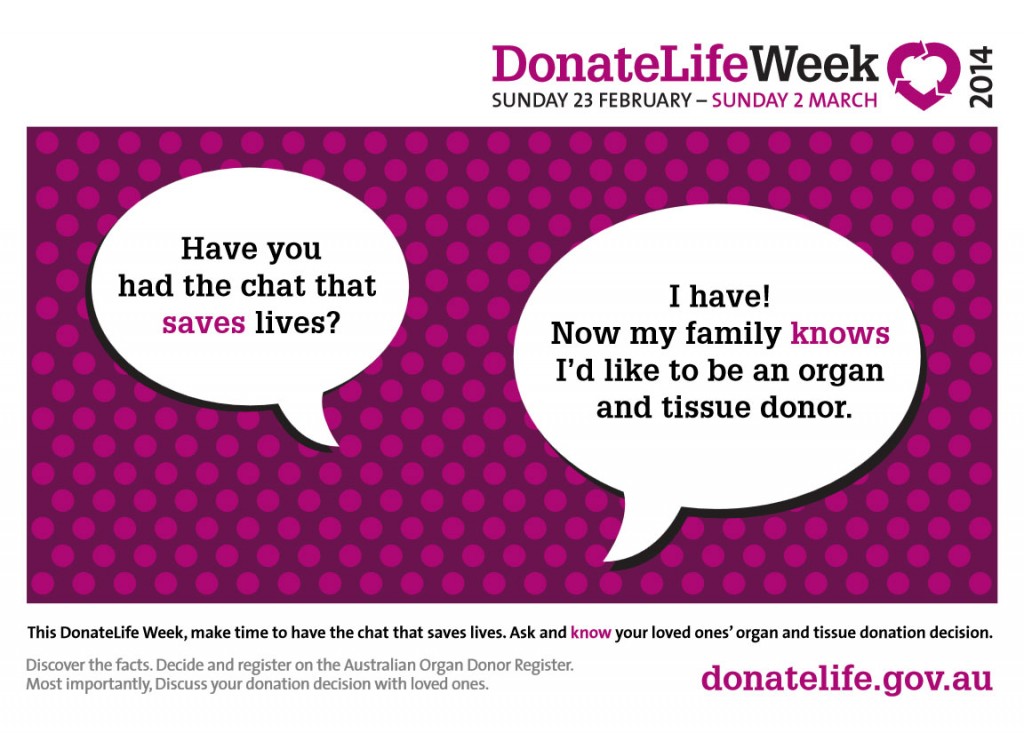