Murphy’s Law refers to when everything that can go wrong, does go wrong….which means it does tend to dwell on the negatives…

But we humans do like to have some explanation why things aren’t going our way….and I have to say it is something I come across far too often for my liking!

Apparently, there really was a Murphy…a Captain Edward A. Murphy Jr. to be exact….and he wasn’t Irish!

He was an engineer in the US Air Force…I won’t go into the details, but he was misquoted after attending a rocket sled test in 1949 at an Air Force Base.

What he apparently said in regards to a stuff up that happened was “if there’s a wrong way to do a thing, somebody will find it and do it that way”!

And somehow, that has evolved to Murphy’s Law as we know it today! 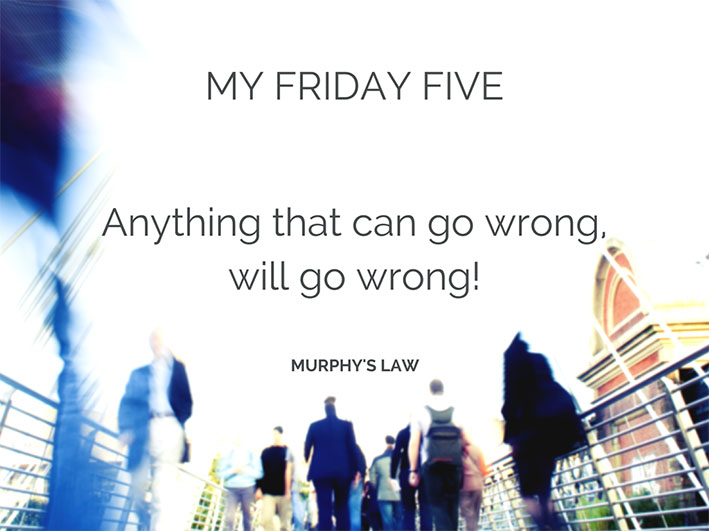 1. When you are in a hurry, you will get every red light, pedestrian crossing, slow driver etc. When you have plenty of time, the drive usually goes smoothly!

3. As soon as you get served food and drinks on a flight, you will get turbulence….especially when trying to drink a cup of the overstewed tea…never fails!

4. When you  are waiting for a parcel to arrive, it will take days….while bills and junk mail seem to arrive at the speed of light!

5. When wearing a white shirt or pants, you will either drop food or drink right down the front, or sit in something….never happens when wearing other colours….or is this just me?

What examples of Murphy’s Law have you experienced?

Each year, DonateLife holds remembrance services across Australia, and yesterday was the Melbourne service. It is a special event that has become very important to us...this is the third one we have attended. The remembrance service is one of the few times that people from all steps of the organ donation process gather together in one place. There are donor Continue Reading →