The Headache from Hell!

I have had rather a rough week…well, it actually started last Friday…

I am a migraine sufferer…have been for over twenty years…but I have never experienced anything like this.

I usually get an aura…its like looking through a kaleidoscope…then my vision clears and I feel a bit woozy….can’t read or look at a computer screen…but I don’t get the full on headache.

However, this episode was a new one…oh joy…at first, it was ok, I could deal with it…then on Sunday…well…the volume was turned right up!

This was a “head in a vice”….”my brains are going to explode”…”somebody shoot me now” sort of headache….aka the Headache from Hell! 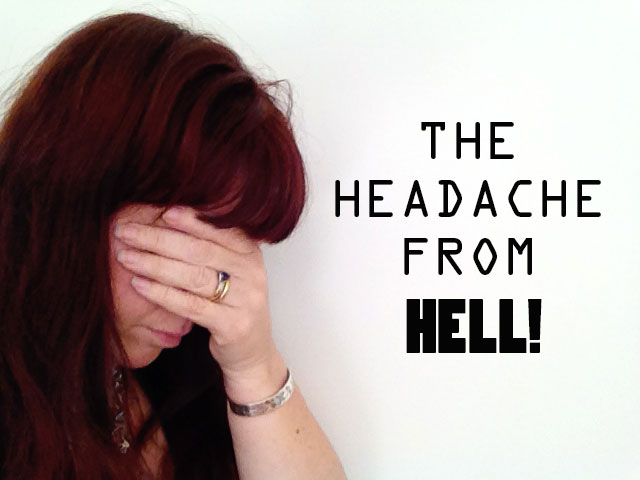 Yet funnily enough, it didn’t affect my vision…I could still read and watch TV…not that I felt like either…

Although, to be honest the Nurofen Plus did take the edge off the pain, but pain still hung on with all its claws!

Tried a heat pack…an ice block…used essential oils such as lavender and peppermint.

But no luck…this thing wasn’t stopping….

This called for stronger artillery….so called my doctor’s, and they said it would be a two day wait….guess that means flu season has arrived!

I must admit a few tears were shed at this point, and a trip to emergency at the local hospital was looking like a possibility…but having seen far too many emergency rooms with my husband meant that would have to be the last resort.

I was in pain, but it wasn’t life or death…although sometimes it felt like it!

I suffered for another day, then called the doctors again in desperation, and finally was able to get an appointment….thankfully!

By this stage, my face was feeling numb…and wearing glasses was impossible…my face felt too weird…numb yet painful.

Sitting in that waiting room was enough to make a person ill….full of coughing, sneezing sick people…hopefully the flu injection I had recently will keep those germs at bay.

I don’t fancy sneezing with a head that could explode at any minute!

The doctor was sympathetic, but as to what was causing the headache…who knows?

So the plan is to stop this particular attack using Mersyndol Forte which also has a relaxant in it….plus sleep, and lots of water to make sure I am not dehydrated.

There was no way I could make it into work, so am well behind in my projects and that stresses me out even more…thankfully, I had drafted some blog posts for this week, so was able to keep up with Zinc Moon…there is definitely an advantage in planning ahead!

But the bad news is that its now Thursday…almost a week since this started…and yes, I still have a headache….just spoke to my doctor who advised giving the strong painkillers a bit longer to see if they can get the pain under control.

I have to admit that because I have had a brush with cancer, it does play on your mind…what if this is another cancer which has snuck in…I don’t want to become a paranoid hypochondriac but it is enough to drive you mad, no matter what the doctor says.

So headache…please listen and go away…and never come back….I am begging you…

Do you suffer from headaches and/or migraines? What are your tips for surviving an attack?