It’s been a while since I have done a magazine review…I have been good by not buying many as I just didn’t have the time to sit down and read them, which meant my pile of “must reads” was getting out of hand!

But this magazine is a little different…it is more then just printed words on paper!

The Big Issue is a not-for-profit social organisation that is all about helping people to help themselves.

And one of the enterprises they run is a fortnightly independent magazine which is sold on the streets by homeless, marginalised and disadvantaged people.

The concept came to Australia in 1993 when a group of prominent Australians joined together to develop ideas on how to address the growing homeless population, living on the streets.

A model based on the UK’s successful Big Issue was proposed, and the first issue was launched on the steps of Flinders Street Station on June 16, 1996.

You can now find vendors all over the city in Melbourne, as well as in Sydney, Brisbane, Adelaide, Perth and Canberra. There are also some vendors in regional centres….in fact there are over 500 vendors working each fortnight across Australia!

And the model works likes this…the vendors are not employees of The Big Issue…they buy the magazines for $3 and sell them for $6, keeping the difference.

This means their success is based on their own efforts and diligence in selling the magazines.

And since The Big Issue was launched, over 9 million magazines have been sold!

To be honest, I never really took much notice of the vendors…I was unaware of what The Big Issue was all about, and I had no idea of the content.

And then one day, we bought one…and I found it an interesting read!

So much so that if I am in the city, and a new edition is out, I will buy it.

The magazine covers a huge range of topics, and will often print stories that mainstream magazine and papers might not be able to…they don’t have any political or religious affiliations either which makes the content refreshing, unbiased and unique.

For example, the latest issue covers a feature on Rebel Wilson, The Big Quiz, and an article on capturing big cats on camera…plus a various reviews on books, films and arts. 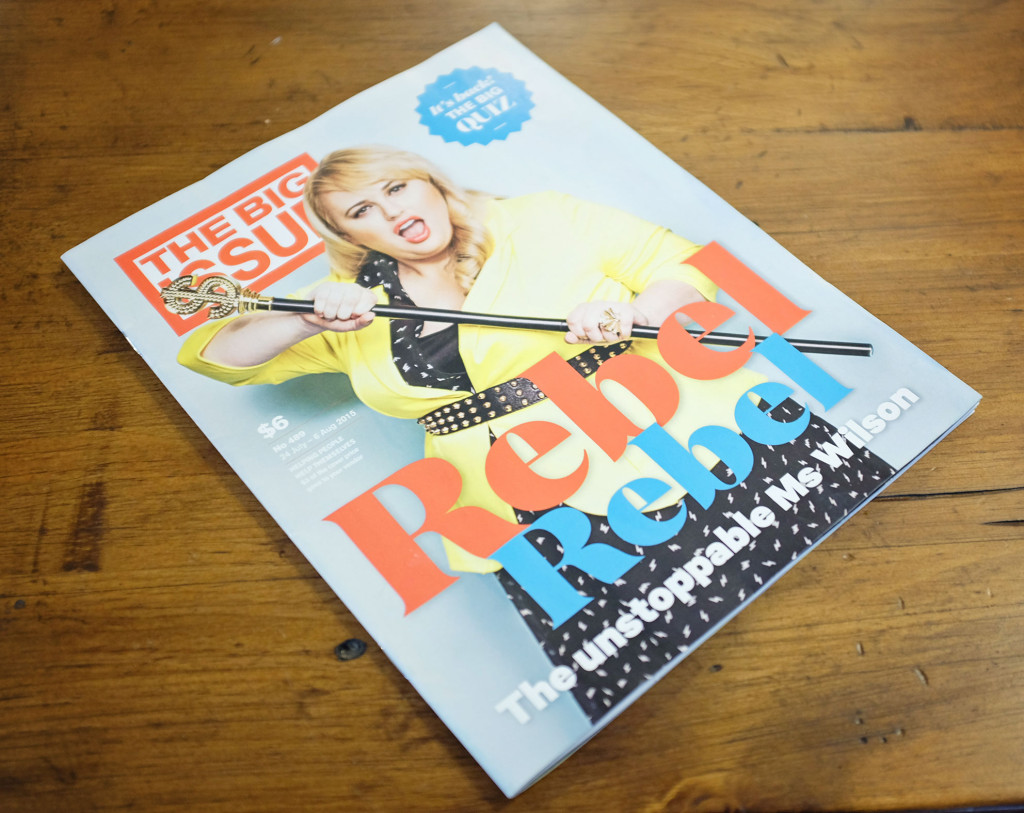 The vendors can be real characters…this issue we bought from a guy selling near the end of Centerway Arcade…cheerful and chatty!

So instead of ignoring the vendors like I did for so long, stop and buy a magazine…and have a chat to the vendor!

If you are in an area that doesn’t have any vendors, you can subscribe via the website…income from subscriptions goes to help homeless, marginalised and disadvantaged women through their Women’s Subscription Enterprise.

Either way, you get a good read, and the people who need it are getting money to put towards getting their lives back in order…a win-win situation!

Click here for more information on The Big Issue!

Do you regularly buy The Big Issue magazine? Do you have a favourite vendor?

« Another Post Liver Transplant Achievement! » What I Wore Roundup – Edition 7