Today, I saw something that used to be a sure sign that Christmas is on it’s way…something I haven’t seen for many, many years….I saw a Christmas Beetle! 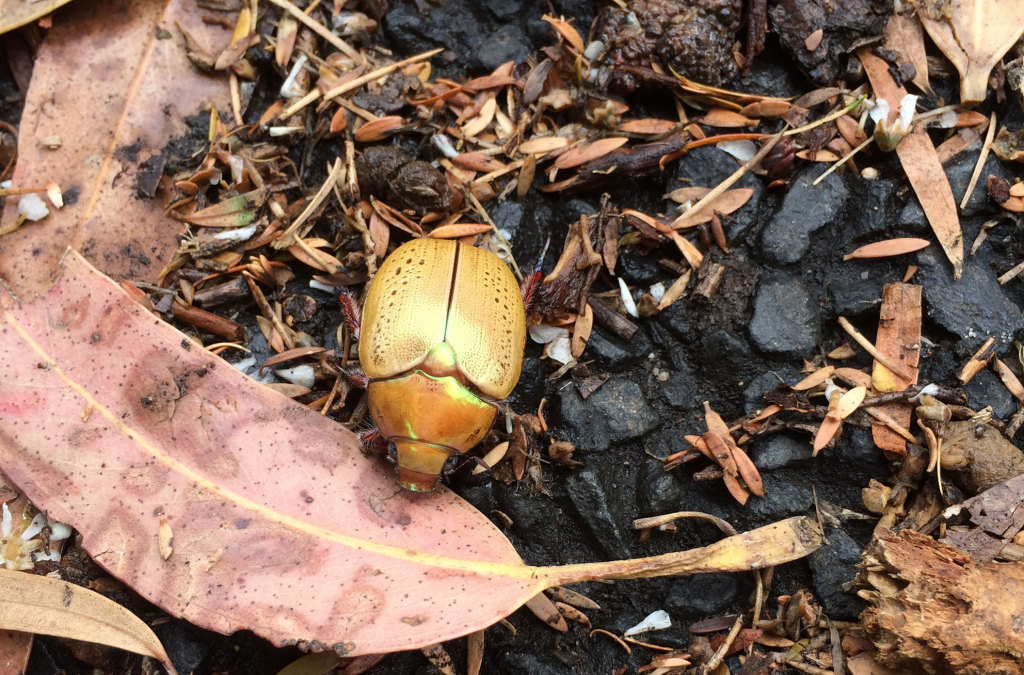 As a kid, I remember hundreds of these pretty beetles buzzing around the family holiday house…and sometimes inside the house!

They used to congregate around the outside lights at night, and hang in the big gumtrees that lined the driveway….you could hear their whirring of their wings

Christmas Beetles are notoriously clumsy…when they attempt to fly, they are like drunk baubles, crashing into walls, windows, trees, people…I remember them catching in my hair if I wandered too close to the action.

We often used to find them dazed on the ground after big night out at the local night light!

I am not particularly fond of creepy crawlies…in particular, I can’t stand large eight legged things and I won’t go near a cicada…but I have no fear of these beetles for some reason.

They are very placid…probably because of all their late nights….so are easy to handle.

I did a quick bit of research, and discovered the following Christmas Beetle facts….

My parents and I were only having a discussion about them a month or so ago, wondering if they were gone from this coastal area for good.

I read that if the conditions are too dry, the adults will die waiting for enough rain…and if there is too much rain, then they can drown, stuck below the surface.

Also their habitat has shrunk, which means the large numbers of almost plague proportions that I remember as a kid are gone…now they are hard to find, if at all.

Maybe it’s because of all the rain we have had, maybe it was just luck…but today, I found one…one solitary Christmas Beetle…a metallic shine amoungst the leaves.

All is now right in my world…bring on Christmas!

Are Christmas Beetles a familiar part of Christmas for you? And do you still see them?

As part of the open celebrations for the Australian Transplant Games being held here in Melbourne, there was a public activation held today at Federation Square. We were all given orange t-shirts to wear, and it was like a third team had somehow become involved in the AFL Grand Final....there were Hawks supporters in brown and gold, Swans supporters in Continue Reading →